Posted on May 1, 2014 by allthewaysthereandbackagain | 4 Comments

A loud blow of a horn and a sharp slam on the breaks was the first indication that something wasn’t right, the second was when the bus left the bitumen surface, off the road into the ditch to the side. The car in front had failed to indicate and the driver of our bus had failed to realise the change in speed, so to avoid a collision the bus was pointed off the road and into the siding. No need to worry family and friends there where no injuries encountered, not even close to be honest, it was more like the bus coming to a controlled stop at the side of the road… but we just wanted to grab your attention.

This bus was going nowhere…

“luckily” for us the first person to stop at the bus was a local taxi driver and after some careful haggling we where back on the road on route to Kota Bahru. According to a local, Kota Bahru used to have heaps of tourists trotting the streets all the time but over the last ten years, with some questionable planning decisions and a government that has made some interesting decisions for the region, tourist numbers have been drifting away, luckily for us this meant that the museums, off which there were many, were practically empty.

We didn’t have an appropriate picture, so heres some delicious Cendol from Kota Bahru

Kota Bahru is known for its abundance of markets, and as some regular readers may have gathered… we like markets…so we set off to explore them in-between museum visits. The Central market was awash with colour as malay ladies sold fruit and vegetables from little stands in the centre and everything else from raw meat to clothes were sold around the outside (a highlight in the clothing department was a t-shirt saying keep calm and wear a hijab, a perfect reflection of malaysias mix of cultures), however after one too many rat spottings and the pungent smell getting a bit much we left this one for the locals. Next was the once famous night market, which had now been moved to behind the sewage works. Nevertheless there was an abundance of stalls selling everything from satay chicken necks to stuffed cuttlefish, while hollywood movies pumped out on the tvs dotted around the area. We tucked into a delicious Murtabarak (meat stuffed pancake) and a veggie salad creation, while our buddy Britt had the local special of nasi kendar… blue rice with a variety of different toppings. 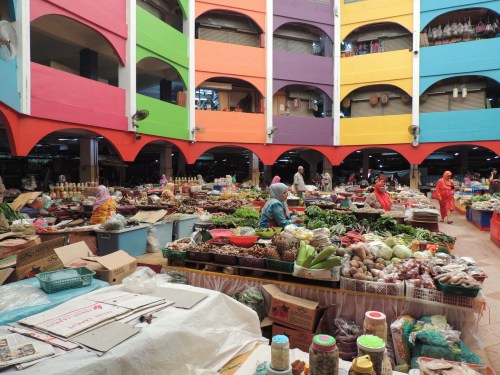 The malaysian version of bury market…

After our market exploring we set in search of culture, and where better to start that the cultural centre (the clue was in the name). It was here that we encountered our first showing of SE Asias famous shadow puppets. After a very brief english introduction a heavily drum based band, accompanied by gongs and pipes, cracked into a tune while the puppet master moved the puppets from behind the screen with precision and ease. We wern’t exactly sure what the story was, in fact we had no idea.. but as the narrator talked away in malay the crowds roared with laughter. For us it was just nice to see the images and a nice glimpse into how malays like to spend there free time.

Leaving Kota Bahru it was time to say goodbye (again) to our best travel buddy Britt, but I’m sure we will run into each other agin sometime. For us it was off to “the pearl of the orient” – or as its more commonly known, Penang. We settled down into our lovely hostel, cocoa mews, in the heart of little india and set off to explore what was so special about this Island. To our surprise we found a lovely clean city full of interesting colonial architecture, up and coming street art, intricately detailed temples and most importantly…. THE MOST AMAZING FOOD, but more on that later.

Some street art in Penang..

Early Chinese migrants to Penang built in the style of their previous homes, houses on stilts out into the water. These Clan Jetties where great to explore; all the families with the same name, e.g. Lee, and so from the same region in China lived along the platforms and still do. Clan houses, Chinese and other buddhist temples, mosques and hindu shrines all rub shoulders on the island. We saw huge   statues of buddha looking distinctly female, evil looking hindu carvings with bulging eyes, the third largest reclining buddha in SouthEast Asia, plus more incense and candles than you could shake a stick at. 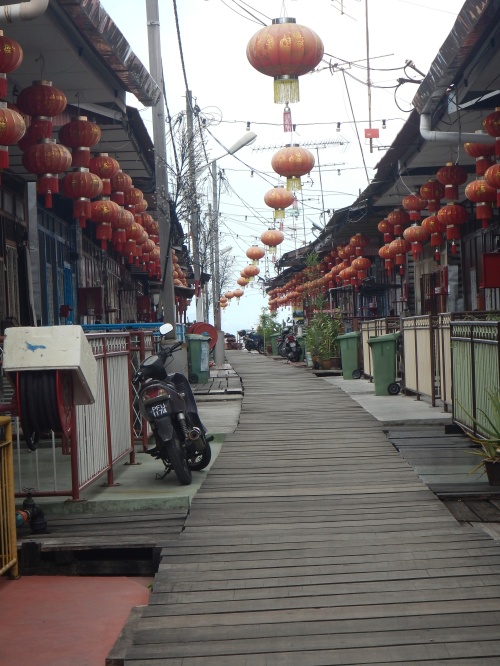 One of the more well maintained clan jetty’s

So back to food.. after reading many blogs and watching Anthony Bourdain’s great food show on Penang (which you can watch here), we set off on search for taste sensations. We want you to imagine the top of the pops theme tune while we count down our top three….

Following our noses on this one, and desperately craving some indian food we wandered into this restaurant close to our hostel. We both went for the “famous” tandoori chicken because a) it was famous and b) the smell of it from the kitchen was divine…. we weren’t disappointed. The bright red chicken was perfectly spiced with the classic indian flavours, and when combined with the soft garlicky naan, and a mixture of accompanying herby and fruity condiments made for a very tasty dinner indeed. This place was also open 24hrs… so if your ever in Penang and have an indian craving in the wee hours, we recommend this place.

Dim Sum for those who don’t know is traditionally a chinese breakfast meal. Its not one dish in particular, but instead a combination of steamed and fried dumpling and buns, with occasional small plates of other tasty morsels. The eaters choose the small plates of dumplings and buns, enjoy them with soy and chilli sauce and wash it down with copious amounts of green tea. This particular Dim Sum is probably the best we have ever had. Choosing dumplings for there looks more than anything we ended up eating delicious things such as chicken and oyster steamed in its shell, fried pork wantons, soup dumplings and last but not least pork buns. All were delicious but the pork buns deserve a special mention. A rich and thick stew of BBQ pork, mixed with sesame seeds and steamed inside slightly sweet fluffy dough…. my mouth is watering just writing about it. They were so good we had seconds and even took a selfie with them…

It may not look like much but this was delicious!

After careful deliberation there is no doubt that this was the best food we had in Penang, and probably the best plate of noodles we have ever tasted. The small stand was manned by an older asian lady who looked as though she was cooking more out of muscle memory rather than having to think about it… this was a good sign! We sat on our kiddy stools at a table at the side of the road and looked on bewildered as we tried to work out the bowls contents. This seemingly simple dish had some basic ingredients.. noodles of course, small slithers of BBQ pork, some chinese greens, wantons (steamed and fried), pickled chills and some other small unidentifiable morsels, that were all combined with a soy based sauce that made the dish incredible. The recipe is a secret, however we did find out later that it most defiantly contained lard, but when mixed with those noodles it had us coming back time and time again. 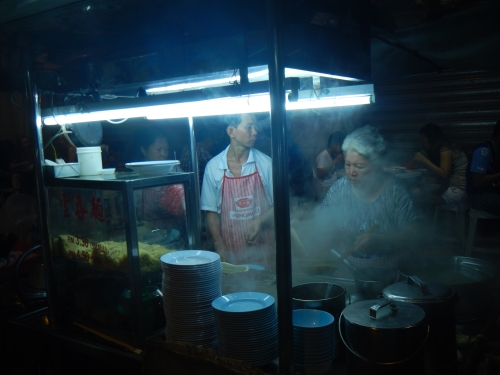 The lady working her magic with the noodles

This foodie adventure pretty much brings us to an end of our time in Malaysia. Its been an interesting and eye opening four weeks…next stop Thailand!