Posted on June 13, 2014 by allthewaysthereandbackagain | 5 Comments

WARNING: If you are in any way sensitive to self indulgent pictures of ruined Buddhist temples, look away now…. 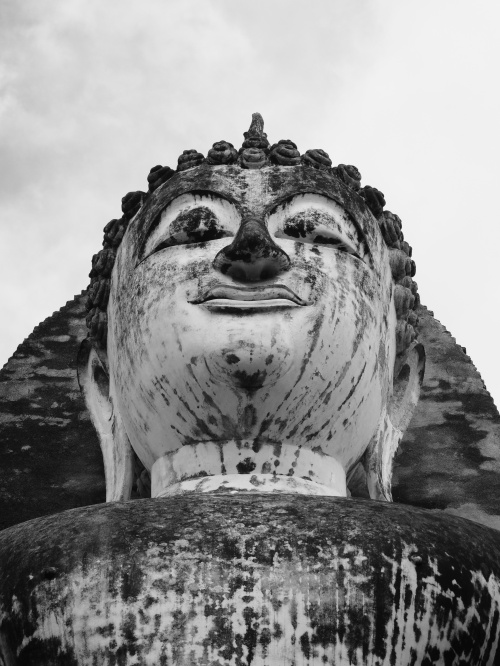 We jumped aboard the local bus; the colourful bodywork shook and rattled as we trundled along picking up and dropping off passengers on the roadside. I was having a casual chat to a monk about where we where from and football, before being interrupted by his thai heavy metal mobile ringtone and other locals talked at us in Thai and seemed baffled that we didn’t understand, but impressed we could say “bus station” in their local tongue. This was or journey to the ancient city of Ayutthaya

Moving out of twentieth century history our next stops took us way way back to the ancient capitals of the Siam empire, and the crumbling remains of the people that used to rule there. Our first stop was Ayutthaya and this city was hot and beautiful…but mainly hot! Getting up impressively early we jumped on our rental bikes with the aim of beating the heat and day trippers from Bangkok to see the main complex of ruins in the heart of the city. It worked – we had the majestic structures almost to ourselves. We could write several posts about these beautiful temples, but we will spare you or ramblings and let the pictures speak for themselves…

Another early start and another journey to a ruined city, this time on the local train north. No monk chats this time but instead we ate snacks from the stall vendors and Ryan almost lost his arm when the open train window suddenly fell on it! Opting to stay in Sukhothai’s new town we had a very obvious moment of deja-vu when we jumped on our rented bikes, and set off to cycle around the ruins. Hey if it worked at the first ruined city why not d the second?!? It was once again very beautiful and also older than Ayutthaya, set in a historical park, perfect for leisurely cycling.

An added bonus to our stay in Sukhothai was the unexpected walking market and concert by the river. Full of food stands and vendors and also a military girl band singing cheesy songs slightly off key. It seems this was part of the military’s positive image campaign, made clearer when soldiers attempted to get us on the improvised dance floor, surrounded by their armored vehicles…it was a little different. 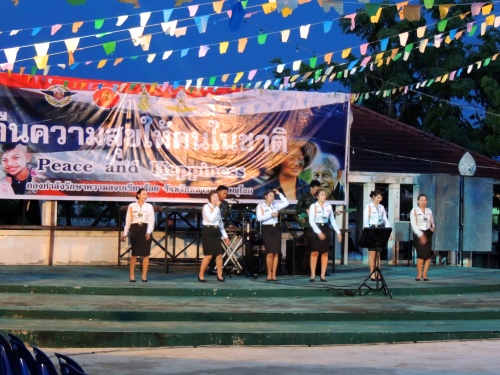 Our next stop is to be our last in Thailand for a little while at least, the northern capital of Chang Mai. See you there!