How many scammers does it take to cross a border? Thailand to Cambodia

The crossing between Aranyaprathet to Poi Pet, from Thailand to Cambodia, is notorious. Dodgy tuktuk drivers, fake visa offices and even bribing officials are just some of the underhand tricks played. Really its a big “lets see how much money we can make out of tourists” fest! So as you can imagine we approach the border with some trepidation…and researching the hell out of it on other people’s blogs! So this is our experience.

One of the most frequently done scams is before you’ve even made it to the border. Tuktuk drivers often take you to fake visa offices, hoping tourists will part with their dollars only to be given a useless visa! (N.b. There is only one legitimate visa office, and that is found after you exit Thailand). We told our driver sternly not to stop and luckily (for him) he didn’t…I think we had the most honest driver ever as he only charged us 50 Bhat for the trip instead of 100 Bhat that most drivers were charging….

Pulling up to the official Thai departure office, some well dressed men still tried to shuffle us towards yet another fake visa office..”Visa over here”, “No thank you” we would say with a smile on our faces, much to their dismay ….

Making it to the Thai immigration one might think we were in the clear… but no. We had heard that pick pocketing was rife even in the office, so as we made our way through immigration, getting our exit stamps, we hung on to our belongings like they were the only things in the world we owned… o wait, they are.

We continued walking through the no mans land between Thailand and Cambodia, gazing at the gaudy casinos for affluent Thai gamblers and shops selling cheap duty-free goods. In Thailand gambling is illegal,  so this is where they come to get their fix. Casinos tower on both sides of the street, the air conditioning following out onto the pavements outside.

Once we had made it to the legitimate visa office (just before the Angkor style arch, on the right hand side), we filled out our forms, attached a passport photo and handed over a $20 fee in accordance with the official signage above the visa window. The official, complete in military uniform, then asked for an additional 100 Bhat… but I simply asked him why until he gave up. Even the officials were scammers.

Visa in hand we walked on, passed more casinos, and officially got stamped into Cambodia. A free shuttle bus is on hand to take you to the Tourist Departure Terminal, where we shared the cost of a taxi with some other westerners and rolled into Siam Reap. Ryan again had a very stern word with the taxi driver and made very very sure the driver was not going to drop us off at a tuktuk rank in the middle of nowhere (another common scam), basically saying we wouldn’t get out until we were taken to our guest house. It worked! 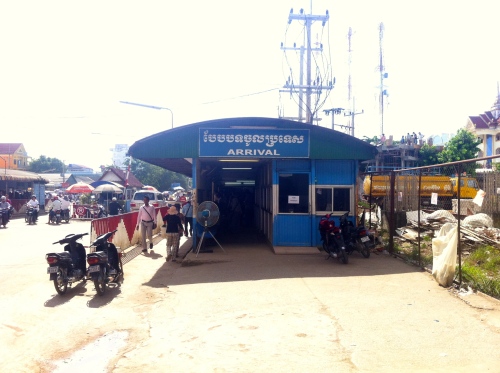 This entry was posted in Cambodia and tagged Cambodia, No Planes, Poipet, slow travel, Thailand, Travel. Bookmark the permalink.