We had almost given up on haggling for the boat ride for the day and had started to walk away disappointed, when the boat lady stops us in our tracks. Through broken english and exaggerated hand gestures she explained that if we cycled up river and away from her boss, she could pick us up and charge us less. Playing it super cool we did just that and waited as the lady turned up on her motorbike, payed someone else for their boat and with a mischievous laugh, beckoned us onboard and rowed us on through the limestone Karsts of Ninh Binh. Was she a criminal mastermind? Were we part of the Crime of the Century? Judging by her schoolgirl giggle…. I think so. 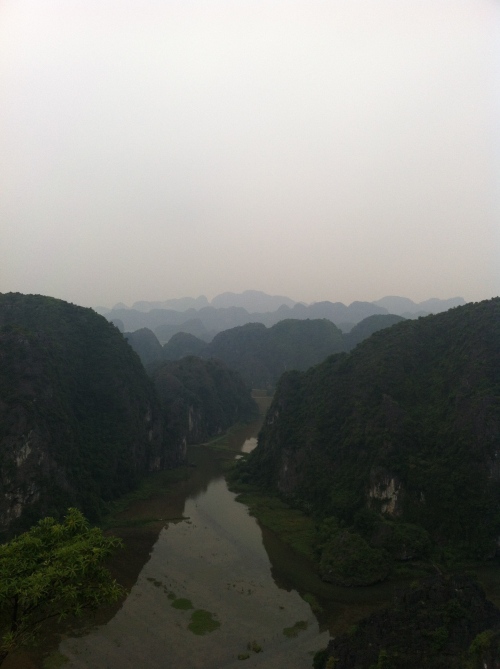 We arrived in Ninh Binh on the train just as it got dark, and without being able to see the station sign, we hopped off and hoped we had the right station. The town itself is a fairly charmless, dusty affair but it is what surrounds Ninh Binh that makes it a worthwhile stop on your travels through Vietnam. We based ourselves at the Xuan Hao hotel, a clean and cheap guesthouse with friendly owners who offered the local water (rice wine) at every meal (including breakfast) and set off to explore. 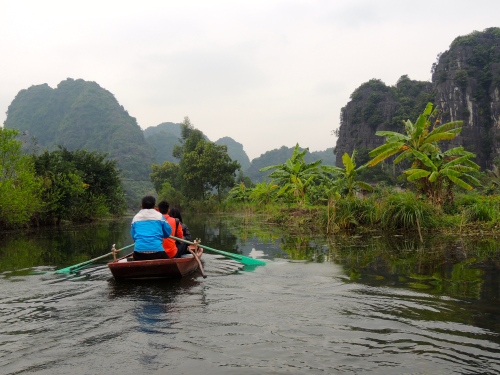 Often referred to as Halong Bay on land, the area surrounding Ninh Binh and the town of Tam Coc is filled with hundreds of limestone karst formations jutting out from fertile rice paddies, making for spectacular views in every direction. Equipped with a bike we cycled our way along the small paths between the karst formations watching people feeding their ducks and chickens, kids playing, guys fishing in the flooded fields and numerous other idyllic scenes. We explored the Bich Dong pagoda, a temple built into the mountain side and through a series of caves and when we reached the highest level of the temple we carried on up, climbing the jagged rocks to admire the view below. 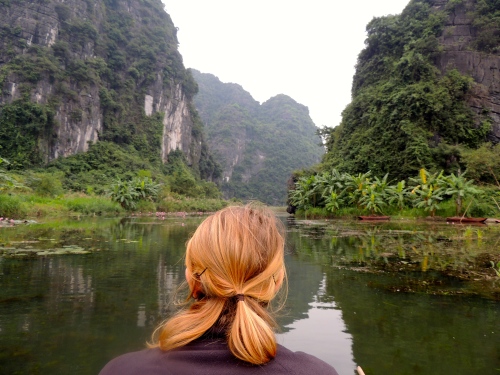 With our legs growing tired we took a break from cycling around the limestone karsts and opted for a row through them instead (this is where we met the mischievous boat lady). As she used her feet to push the oars through the water, we glided along through blooms of pink water lilies floating on the river, staring on at the towering karsts all around and even spotting the odd mountain goat or two clambering about impossibly high on the cliff faces. We sailed on through low caves, ducking as to not crack our heads open before heading back to pick up our bikes hidden in the bushes. This is a good tip if your planning to go to Ninh Binh…this less busy and cheaper boat ride is around the corner from the main village of Tam Coc, on the way to the pagoda. Another piece of advice if you’re a big animal fan is not to look in the restaurants of the village…we saw a couple of whole dogs hanging up ready for a noodle soup, paws and all!

After a food pit stop, (not to eat dog) we headed on to Mua Cave where Vietnamese forces had a hospital during the bombing of the American war. The bigger draw though is the 500 step climb to the top of a karst, where a statue of buddhavista looks down on the town below. More people go for the view at the top though, and its worth the sweaty climb to look across the peaks and breath in the beauty…I know I know travelling cliché but it was stunning…well until the local teenagers arrived with loud pop music blaring on their phones which kinda broke the spell!

In short if you’re in Vietnam go to Ninh Binh, its ace!