As we watched the wheels of the car in front spin in vain we knew that we would have to get out and push. Now I’m sure there are worse places in the world to get your car stuck in the snow, but at 11:30pm, in the middle of a frozen river (which also acts as a disputed national border) and its -40 Degrees outside (Yes you read that right -40 celsius), we weren’t so sure…

We had arrived in the town of Mohe in the far north of China, right on the border with Russia, and it was cold… very cold… so cold that four pairs of socks was barely enough to keep your toes attached to your feet, and any beards that one might be sporting would instantly freeze in the surrounding air. After a few false starts, and one particularly comical faceplant (ahemRYANahem), we finally made it off the river to a nice warm room to sleep and regain feeling in our toes.

Bad picture but this is the offending car….

This remote corner of the country is the most northerly point in China and a place where it is winter for seven months of the year and temperatures barely make it above -15C. What were we doing here you ask? Well to see Russia of course…well in fact better than that to stand in both Russia and China at the same time! In the North Point Village (or Beijixiang) you can walk through a lovely, though bitterly cold, park that marks the meeting of the two nations and have a little peek over at the Russian mainland (and also stand on a very small part of a Russia). In contrary to the well established Chinese side of the border, the Russian side was void of any settlements bar a lonely looking sentry box, but was home to some incredible looking mountains. After visiting the most northern point of China we of course had to visit the most northern shop in China, the most northern house in China and even the most northern toilet in China…I suspect someone was trying to make some money out of this?! Well I guess it wouldn’t have been China if they didn’t?!

One foot in China, one in Russia 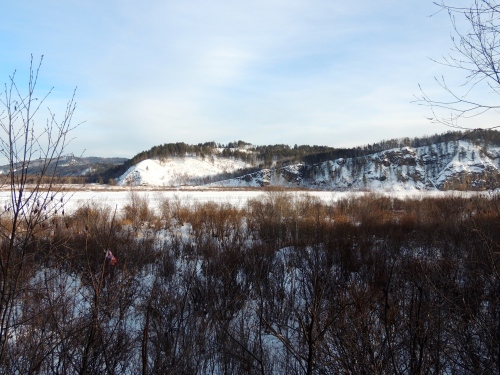 Thats Russia across the river…

With winter and Christmas being interchangeable in China, it of course made sense that, along with the deep beautiful snow there would be a Christmas town with the one and only Santa Claus all the way from Finland! It sounded so ludicrous and tacky that we just simply had to go and frolic, especially when we found out it was the fourth top thing to do in Mohe according to tripadvisor (there were 5 things in total).When we arrived most of the buildings in the village appeared to be locked up, however when we found an open one (which turned out to be santa’s house), we were not disappointed. It was just as tacky as we had imagined, with glitter clad decorations covering every available bit of space on the walls, and  slightly scary full-sized reindeer figures staring at us from all directions. Our happiness however seemed to be too much for some, as we where eventually interrupted by an angry elf telling us to “get out”…. It must have been a tough Christmas. 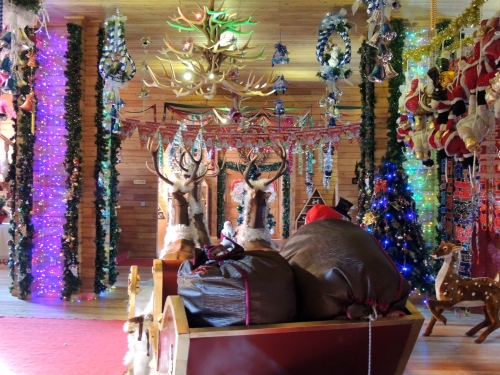 The elf became slightly less grumpy after he saw our money and with our 6 slightly overpriced tickets in hand, our group of 20 and 30 somethings bounced up the stairs to see Santa Claus as excited as kids on Christmas day. We looked around santa’s office, and saw santa’s seat, but when we asked the grumpy elf to see santa he told us we had to pay more… that’s right we had to bribe Santa to make an appearance. Nothing quite says Christmas like rudeness, greed and tacky ornaments does it? The whole thing was so funny we all burst out laughing and instead of seeing santa, just took turns in his chair using a white rug as a beard! Laura also managed to skill-fully steal the ears off one of the scary reindeer! 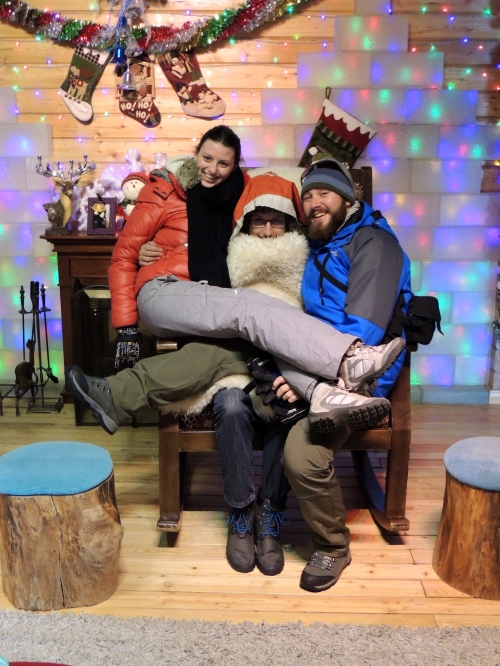 Having recovered from our Santa experience, and feeling as though we hadn’t had enough of the extreme cold, we thought we would have a go at catching our own dinner and took the opportunity to go ice fishing. Walking back across the frozen river (and closer to Russia), we started to de-ice the already frozen fishing holes with a big steel pole, before carefully dragging out an already submerged net complete with one very small, already frozen, fish. Luckily our fisherman guide had caught some earlier which he kindly cooked up for us for our delicious lunch!

While in Mohe we also ate some delicious dumplings, exquisite noodles and drank the famous local blueberry wine. The later wasn’t the best. Perhaps it was the fact it cost us about £3, or that we drank it in a smelly train station or maybe it was because without a corkscrew we just pushed the cork into the bottle with a borrowed screwdriver! Who knows but this tour group knew how to keep it classy! 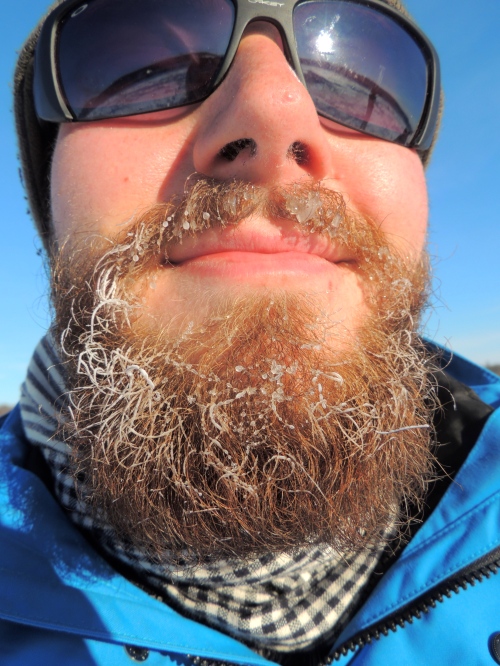 From one border to another, next we were off to have a peep at North Korea.