Ancient walled cities in the smog…Pingyao and Xi’an

With the organised part of our trip to China now behind us, it was time to go out and explore by ourselves, and where better to start that with some of the oldest and most historic cities in China, Pingyao and Xi’an…

A short 4 hour train ride from Beijing (well 4 hours in an ultrafast bullet train), Pingyao was once the financial capital of China, and still retains a lot of the original features from its hay-day, including its city wall, banks and security offices. Even all the accommodation is built within the old mansions of the once wealthy occupants of Pingyao, and allows people like us the opportunity to go and sleep in traditional buildings, built around traditional courtyards and sleep on traditional rock hard beds. Unfortunately for Pingyao, one of its main borrowers back in the day defected on their loan and the city went broke… Sound familiar?

With the northern weather having followed us and the snow falling we set off to explore the 10 metre high walls completely surrounding the city, and to also get a huge dose of reality.  The walls themselves were pretty cool, mostly in tact and injected with turrets every now and then, but what stood out most was the smog. Now we had heard about the famous lack of air quality in China, but until now had failed to experience it, but as we wandered around the walls we could barely see 100m in front and it felt as though you could of chewed on the air it was so thick. Un perturbed we pushed on wandering the ancient streets, marvelling at beautifully carved doors and colourful lanterns hanging outside almost every shop. After looking in at the oldest bank, temples and trying the local speciality of cats ear noodles  (not made from actual cats!) is was time to jump back on the train further South West to the city of Xi’an.

When people think of China, they often may conjure up an image of a famous Xi’an attraction. No its not the great wall, but the terracotta warriors! Both of us had been looking forward to seeing this attraction for a long time, having seen pictures and tv shows about this famous sight since we were kids, and even when a guy in our hostel told us not to get our hopes up (what a numpty), we were still excited. Jumping onto an already moving local bus from outside the train station we set of to see the intricately sculpted, 2000 year old statues, yep you read right 2000 years old, army! They where originally built to protect the then emperor in the afterlife, and then buried under bamboo mats and dirt, only to be rediscovered in the 1970s by a peasant farmer drilling a well (you can still see the farmer hanging around the gift shop). 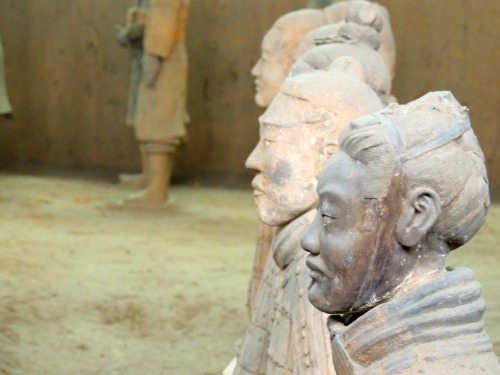 Our lovely friend Sasha gave us some great advice for visiting the warriors: to visit the pits in reverse order (from 3 to 1), and we where glad we did. We wandered through the first pits, looking at some active excavation pits and some broken bits of warriors before finally making it to pit 1. It was not what we were expecting, but as we walked in and looked at the warriors for the first time all we could say was wow, the sheer scale of the pits was just amazing. We did not realise just how many statures there were and how detailed each would be. Each man is different, with hand carved details such as their face and hands. You can even see their finger nails and the plaits in their sculpted hair. I don’t know, maybe its because I did a history degree, but I was impressed…they’re so old and in such amazing condition! OK we’ll give you this one China…a definite wonder of the world.

Xi’an has so much more to offer apart from our porcelain friends, including some great city walls (which make for a very nice cycle, even in the smog), an ancient bell and drum tower (used to tell people when to get up and go to sleep) and some wonderful pagodas, but for us Xi’an’s other main draw was it’s wonderful food. Being the start/end of the infamous silk road the city has been heavily influenced from the West which can be easily seen in the “Muslim Quarter”. The narrow streets are lined with restaurants and food stalls pilled with skewers of lamb, flatbreads,  mutton soups, pomegranates, date cakes  and “Chinese Hamburgers”. Each stall was tended by men wearing white caps and ladies in headscarves… it certainly did not feel like China.

Mutton and bread soup.. so tasty!

Luckily for us our friend Sasha was still in town and treated us to a tour of her favourite spots to eat and drink in the city, including a small shop called mien mien mien (noodle noodle noodle). This shop had some of the best noodles we have ever tasted, with the cities famous belt noodles being the highlight. Thick noodles (that look like belts), covered in a thick oily, spicy sauce. Do yourself a favour, if you come to Xi’an, get these noodles.

With full bellies and a heavy heart we left Xi’an. We had really enjoyed our time here and it had defiantly gone on the “need to visit again list”, but it was time to move away from the ancient, and onto the ultra modern… next time Shanghai!