Waiting for our overnight train in Xi’an train station we had become the centre of attention…well more accurately Ryan had…even more accurately his beard had. This had become a running theme over the course of our trip…Asian people love a beard on a westerner and China was no exception. In fact the covert and often blatant photo taking by locals had if anything got more intense. The bit which was new here was the huge number of times Ryan had been compared to either Karl Marx, Frederick Engels or even Lenin?! That’s right Communists…specifically dead communists. It was difficult to know whether Chinese people just hadn’t seen many bearded men since Lenin to compare Ryan’s to or that this was some kind of compliment…Either way at Xi’an station Ryan was a celebrity, with a group of men queuing up for there turn to pose for a photo with that beard! 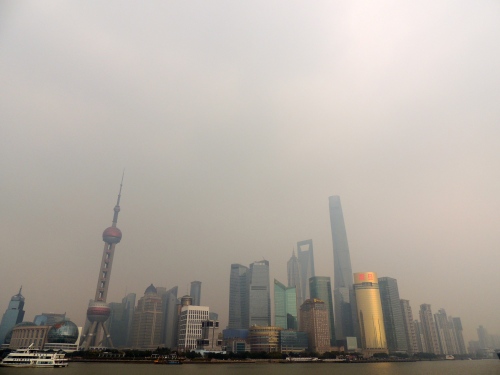 Shanghai had the modern architecture and shiny glass skyscrapers which we had expected more of in Beijing. It was obvious this was the financial heart of China. Smartly dressed businessmen, swinging Starbucks coffees, chatting on their iPhones prowled the streets, along with a lot more Westerners than we’d seen anywhere else so far in China. Here China’s colonial past sits alongside its forward-looking future. This is nowhere more evident that strolling along the Bund, with the British built turn of the twentieth century buildings sit on one side of the river and the skyscrapers of Pudong reach into the clouds across the water. We spent a few hours strolling into posh art deco hotels pretending we were in Shanghai of the 1930s or the ‘Paris of the East’ as it was dubbed.

We also found our way to the Propaganda Poster Museum which houses some fascinating examples of artwork from the 1950s onwards. It was interesting to see the changing perceptions of the outside world from the early Chinese Communist government and even a photo of ballerinas performing with rifles in a communist ballet. To top it all Ryan managed to get his hands on an original Mao badge from the Cultural Revolution! One of the biggest tourists attractions in the city is excellent Shanghai Museum, with a huge collection of ridiculously old bronze things from (you guessed it!) the bronze age! It also had an interesting collection of artifacts from the different Chinese minority groups, costumes, jewellery and handicrafts. And the museum was free…not usual for attractions in China…though we did have to go through overly extensive bag and person checks. I guess we looked shifty or maybe like we could use the money from a stolen priceless bronze dish?