Posted on February 21, 2015 by allthewaysthereandbackagain | 3 Comments

Tucked up in our too ‘small for westerners’ sleeper seats in the overnight bus from Guangzhou to Yangshuo, you get used to noise, stops through the night and the lights going on for no apparent reason. When Ryan shook me awake to say ‘I think we might be here’, the noise and commotion as everyone pushed to get off left us confused. This was meant to be an overnight bus…getting in at 6am and it was only 1:30am?! Attempting to ask other passengers we mainly got smiles and “stupid foreigners don’t  even know where they are” looks (we are used too those). But it was Yangshuo…by some presumably crazy driving we’d chopped a mere five hours of the journey. Now we had to negotiate our way through the dark and almost deserted streets, hoping our hostel’s reception was open and they had a bed for us! 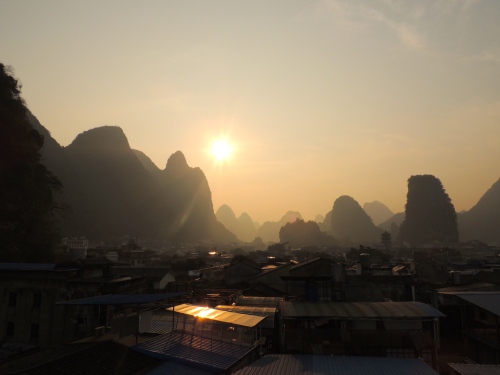 Luckily they did! Yangshuo is a small town nestled in between a mass of lime stone karsts, which seem to spread forever in each direction. As with almost everywhere worth visiting in China it is well and truly on the domestic tourist map, but Yangshou also seemed to have a few expat hangouts. People come to teach english or go rock climbing and end up staying, propping up the bar in a foreign run pub. But we weren’t complaining! The bars were good and the scenery beautiful…we could definitely see the attraction.

After our Chinese breakfast of boiled egg, rice porridge and bread dumplings, we hired bikes and peddled off to explore one of the two rivers that wind through the karsts. With most Chinese towns there’s an attractive old town (sometimes more contemporary than the new one) filled with jostling crowds and tat shops and the sprawl of the more modern part outside, where people really live. Yangshuo was no exception and we spent a long time getting lost along noisy main roads. We did find our way eventually and cycled along the river Yulong, the karsts appearing out of the mist, and watched families floating down the river on bamboo rafts. The day of course had to end with apple pie and chocolate cake…we had done some exercise after all! 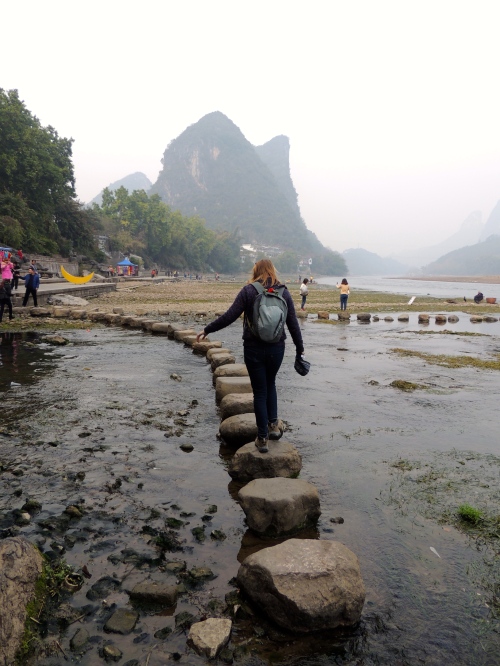 We also explored the more famous Li river, which appears on the 20 Yuan bank-note and is choked with tourist boats taking in the landscape. Making our way on a local bus to the town, Xingping, where the boats depart, we were a little disappointed. The bamboo rafts were made of plastic and instead of using a bamboo pole to push you down stream there were huge motorised engines chugging away on the back. Not quite the relaxing float down the river we’d expected. So instead we walked along the banks, finding the 20 yuan spot and passing through villages along the way. We found some delicious biang biang noodles, thick wheat noodles in oily sauce, before watching the sunset behind the karst on our hostel’s roof top. 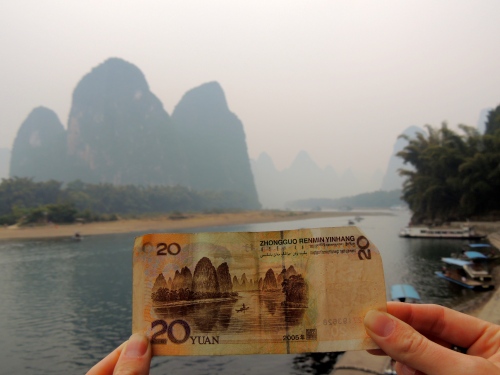 You can kind of see it through the mist…

Ever since reading Swallows and Amazons when I was little, cormorant fishing seemed to be one of the most exotic things my six-year-old mind could fathom (it’s a children’s book about the lake district…they talk about cormorants…there’s some boats…). And here in Yangshuo is one of the two places in the world where they actually catch fish with birds, so we went to watch. Getting onto a shaky boat in the dark we followed the fisherman with his birds as they looked for fish up and down the river. The cormorants dived around the raft, filling their mouths with fish, but are not able to swallow it as the fisherman tied a plastic band around its neck, then forced the bird to release its catch. It was a strange spectacle and weirdly the Chinese members of the group found it hilariously funny (maybe we missed the joke) and all diligently waited to have their photograph taken with the cormorant. Would I go again probably not…should you go…only if you have an interest in obscure fishing techniques. 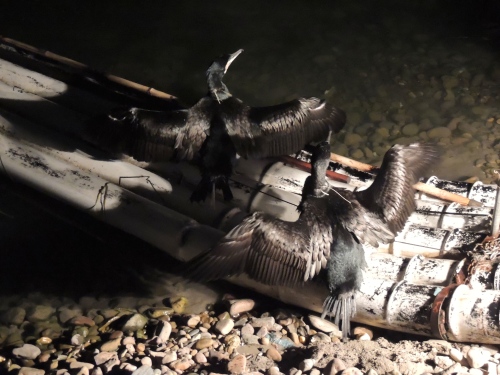 As the rain fell we headed off to Guilin, a much larger town a couple of hours down the road. Guilin is usually used as a jumping of point to another one of China’s unbelievably beautifully sights, but as the mist and rain continued to roll in through the hills, we had no option to cancel or trip, o well, you cant see it all! With no other choice we ended up spending a lot of our time in Guilin in our hostel. luckily for us the “Wada hostel” turned out to be a great one, so good in fact Ryan ended up getting him self a t-shirt. 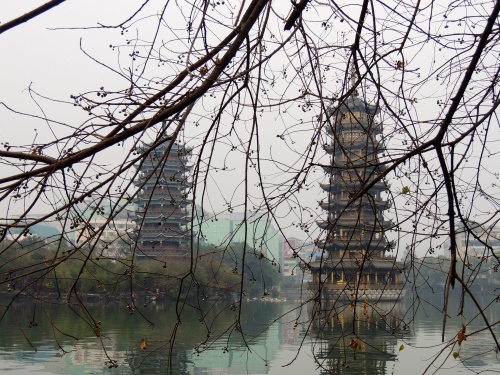 Guilin had some nice parts as well….

With Chinese new year approaching it was time to move on to the backpacker heavy Yunnan province.. 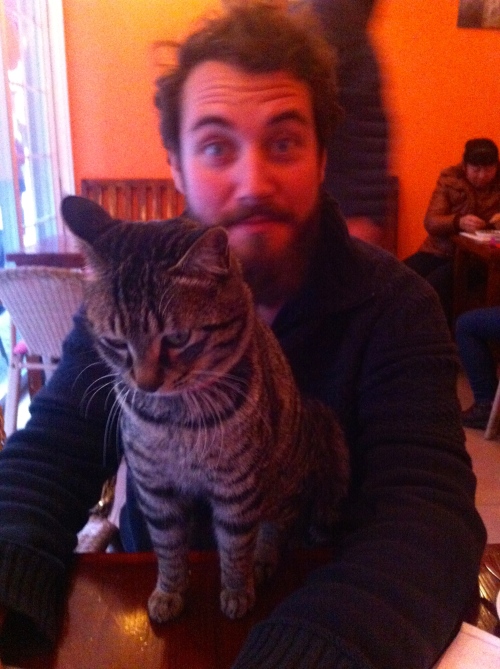 Thats a cat… not Ella…

3 responses to “Cormorants and Karsts…Yangshuo”