Posted on March 28, 2015 by allthewaysthereandbackagain | 2 Comments

Over the course of our two months in China we ended up staying in its capital three times and it’s hard not to be won over by the city. The mixture of good food, historical sites, all in a modern city is there to enjoy…and for some reason the pollution while we were in town was not bad either. Win! To write about everything we got up to would be too difficult  (and boring!) so we’ll just give you a run down of our best bits..

This is where the emperors of old would come a couple of times a year to pray and make sacrifices to the sky god, for the prosperity of his mighty kingdom. Today it is a top tourist site (complete with ubiquitous electric turnstiles!) and park, full of ancient trees. You can stand and make a wish on its centre point and whisper around the walls of the Emperor’s private apartments…

A Beijing foodie specialty which is one of the best and cheapest breakfasts in town. A pancake made with egg, filled with hoisin sauce, spring onions, chilli and a crispy rice wonton; all served up in really impractical plastic bag! Look out for the round hot plates they are made on or head to one of the yellow food stands around Tiananmen Square. Speaking of which…

One of the most iconic places in China (apart from the Great Wall) and the biggest square in the world, it certainly does feel it. With the famous painting of Mao at one end and his mausoleum at the other, it was hard to believe we were really there! The security is tight, bag searches are required to enter and the number of police and guards around is pretty intimidating. We lost count of the number of CCTV cameras in view, but its all worth it.

Karaoke is a favourite pastime all over China, but we had the most fun in Beijing. We had a super fancy room, complete with purple sofa, chandeliers and a bell to ring for more drinks. There was also a TV crew filming there, who wanted to interview us! After three hours of bad singing (with far too many Abba songs) we had completely lost our voices…

Top of all tourist itineraries is the red walls of the impressive Forbidden City and it lives up to the hype. Though we managed to avoid the worst of the crowds, there was still a fair amount of authentic Chinese pushing to get the best selfie in front of the Emperor’s yellow thrown. Quick tip, we watched the film The Last Emperor before visiting, which gave some of the rooms on display a lot more context as not everything is in English.

It’s free to walk around the outside of the site of the 2008 Olympics, seeing the Birdcage and the aquatic Centre, though you have to pay if you want a peek inside. It also shows you just how big this city and country is…and how much they are prepared to knock down to build something else (a huge site was cleared in order to build the stadium, removing a lot of people’s apartments).

A Tibetan and Mongolian Buddhist temple, its unclear how much is here for government propaganda or genuine worship. There are a fair few CCTV cameras on display and some say the monks are really fake employees of the state. Either way the temple has a beautiful tranquil feel and is well used, with dozens of people lighting intense in front of the ornate alters.

You can’t come to Beijing without sampling its most famous dish…in fact we ate it twice! The ducks hang in the windows to tempt you in and are served with thin pancakes, spring onions, cucumber and delicious hoisin sauce. The meat is in succulent pieces rather than thin stripes, ripped apart by two forks like you get at home. And who knew you dip the duck into the sauce instead of pouring it onto the pancake after…it makes so much more sense!

A maze of little streets and alleyways that provide a glimpse into some of the oldest parts of the city where people actually lived. You can spend hours walking around these streets (or even better take a rickshaw) looking at old Chinese men playing chess, sampling some great street food and really getting a feeling of how old Beijing would have felt. 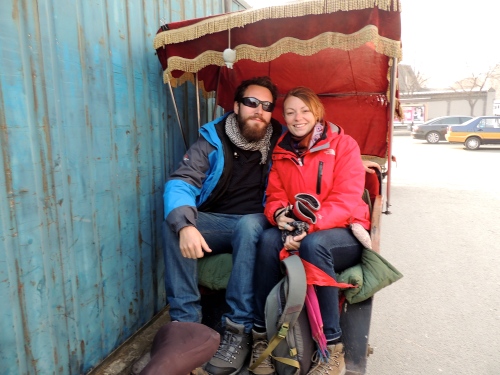 10. The Drum and Bell towers

Once Beijing’s version of city clocks, these towers housed large drums or bells (funnily enough) to let the people of the city know when to get up, or go to bed. Nowadays you climb up to the top of each and get great views over the city (smog depending) and if your really lucky catch one of the drumming shows that are on every few hours.

China divides travellers. Lots of people find it confusing and difficult, the Chinese rude and thoughtless and the opportunities for genuine interaction sparse. Perhaps it was because we had come to the country with trepidation and low expectations based on all the reports we had read but WE LOVED CHINA!

Maybe the months in south-east Asia prepped us for the shoving, the spitting and the rather unsavoury public toilets, or maybe we just got lucky, but we found that we experienced very little of the negatives people had warned us about. We met some wonderful and friendly chinese people who just wanted to make sure that we were enjoying their country, and if we were lost or confused a friendly local was never far away. Because we had to rush, (2 months was really not enough) having to miss out seeing large swathes of the country, we are already talking about our next trip here. The contradictions of the country which seem so illogical to us, only make us want to explore more!

In a perfectly symmetrical way we ended our time in China where and how we had started: in Beijing and on a train. For the first time in a long while we were making our way West to a country we had been looking forward to well before our trip began…Mongolia.

See you on the steppes