Posted on November 18, 2014 by allthewaysthereandbackagain | 2 comments

Sitting for a moment and admiring the colonial post office in central Saigon, Ryan’s beard was once more getting all the attention. An elderly gentlemen pointed and said “You look like Hercules.” Slightly confused at this beginning the conversation got a lot weirder. Next our new friend showed us his biro creations, mainly badly drawn 1960s film stars, our favourite being Clint Eastwood. We were also treated to a rendition of ‘well known’ songs whistled with over the top arm gestures, he was quick to tell us he was the best whistler in the world…presumably winning the coveted title in some kind of whistle off with his nearest rivals. We also heard about his super natural powers, mainly involving thinking about trees falling on his ‘enemies’ and then them actually falling on them, before deciding Ryan was the man to travel the world with and make his musical fortune! Well Josh welcome to SE Asia…. 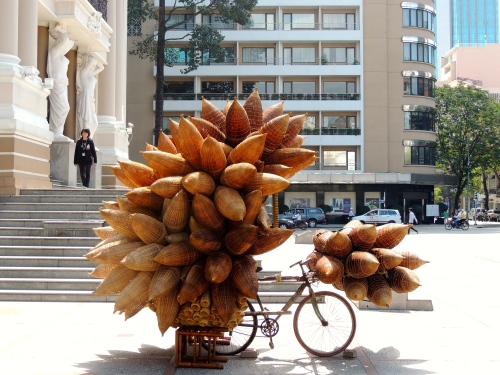