Kung Fu in the snow…Yabuli

Trundling along on a sleigh, being pulled through the snow and ice by a little grey pony I had visions of Christmas or Narnia in The Lion The Witch and The Wardrobe…we were to discover Chinese tourists had different ideas. About five minutes into our scenic journey the driver stops and a Chinese guy dressed in long green coat and fur hat, complete with not too fake looking gun starts shouting and pointing in our direction. The next thing I know he’s got his arm around my neck pretending to drag me off the sleigh?!? Well nothing says fun tourist site like some confusing bandits right! Apparently for most Chinese tourists being attacked by fake pirates in the snow is the best thing for a slay ride…in fact they thought it was hilarious and all diligently qued up for a photo with our would be kidnapper. Once again China you had surprised us! 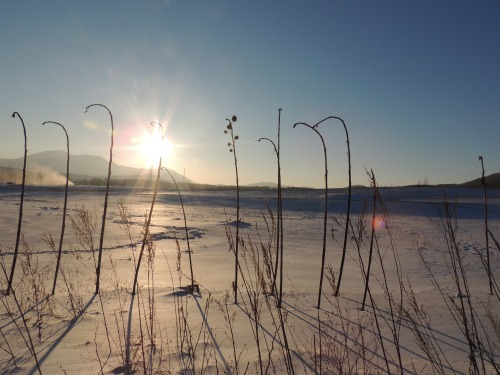 This alarming episode all took place in the alpine resort town of Yabuli, where the wealthy Chinese come to ski and generally do stuff in the snow. As you might imagine there are beautiful mountains in the distance and we were lucky enough to have crisp blue skies while we were there. Our guide, Sasha, plus a dutch man (Thijs), three Brits (Ryan, me and Pang) and a Belgian (Laura) set off to find the farm-house we were going to be staying in. Our rooms had authentic hot brick beds, which involved a kind of bed sized oven made from bricks and stoked with wood each night. The heat from below came up through the duvets we were sleeping on keeping us toasty all through the long night. 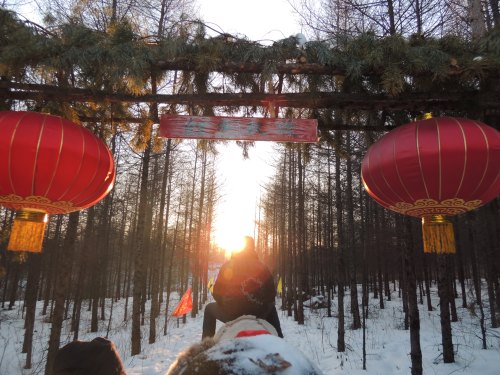 The next morning, after an authentic breakfast of corn porridge, boiled eggs, bread dumplings plus spicy pickles, were off to the ski slopes. The more talented skiers amongst the group headed off in the ski lift to slide effortlessly down the snow. For the less experienced, i.e. Ella, we stayed on the lower slopes, being over taken by seven years olds and posing for photos with the Chinese tourists who presumably couldn’t believe how bad I was! Well at least I didn’t fall over, which is more than can be said for some members of the group who shall remain nameless (not Ryan)!

After the skiing we climbed up a nearby mountain…well took the cablecar…for some spectacular views of the surrounding countryside and a go sliding down the worlds longest alpine slide! Imagine the luge in the winter olympics… but less safe and more fun.You sat on a plastic sledge with a makeshift breaking lever and you were off. It did feel worryingly like they were trying to find a use for an old bobsleigh (the area hosted the asian winter games) but hey we all made it down in one piece! 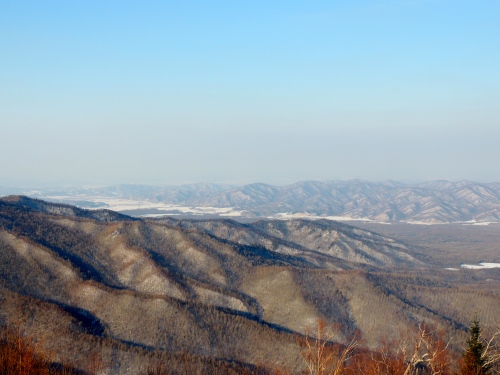 Later that night our apres ski activities had a distinctly Chinese feel with a dumpling making class in our farmhouse accommodation, as we had fun making what we thought where beautiful dumplings, the staff looked on with tears in their eyes as we insulted everything sacred in Chinese cooking. Thankfully (after a complete remoulding from the staff) the dumplings came out looking great and tasting even better. We finished of our time in Yabuli by learning a Kung-Fu routine from our resident sensei (and tour guide) Sasha, as the snow fell around us…very zen indeed.

With a few more hours practice we could have no doubt become kung-fu masters ourselves, but we had a train to catch, well in fact two trains…40 hours of travel to get to the most northern point in China.